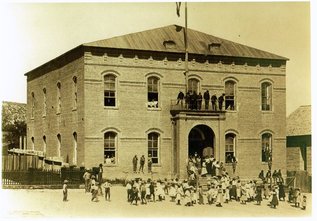 The school system remained largely private and unorganized until the 1840s. Education reformers such as Horace Mann began calling for public education systems for all. By 1900, 31 states required 8- to 14-year-olds to attend school. Many small colleges helped young men make the transition from rural farms to  urban jobs and lives. Schools were now being paid for by taxpayers, but usually only up to the 8th grade. High schools were also growing and in the 1900s there were about  6,000 High Schools. Also more normal schools started to appear, which were school that had trained teachers. There were also more parochial schools. Adults were left out of the education system. But, many adults participated in the Chautauqua  movement , which helped benefit adults in education. This was launched in 1874 on the shores of Lake Chautauqua, in New York. The movement gained success through nationwide public lectures, usually held in tents and featuring well-known speakers, like Mark Twain. The increase in education was very effective the illiteracy rate fell from 20% in 1870 to 10.7% in 1900.