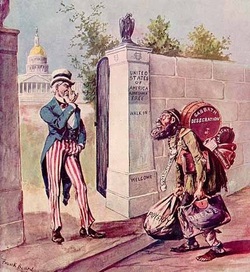 This cartoon shows to attitude towards Immigrants later in the United States. There were no laws to prohibit or limit the number of Immigrants coming into America. This immigrant is  Jewish and is  fleeing Religious persecution, and the Jews were forced to live in run down homes. In this cartoon I see the words "United Sates of America" and "Walk in" and "Welcome". On the Immigrant I see Poverty, Disease, and Anarchy. This cartoon is showing how America accepted the Jewish even though they were from countries with poverty and disease.