During urbanization churches began to lose their place in society. Many people questioned the motives of the churches.  They seemed to be materialistic and new christian liberal groups began to add their own twist on religion they rejected a literal interpretation of the bible and original sin of mankind, and pushed for the social gospel. Dwight Lyman Moody started the Moody Bible Institute and pushed for Christian charity and kindness. His wanted to  connect biblical teachings and Christianity to modern city life. Around the late 1800's the Roman Catholic and Jewish religions increased drastically because of the New Immigration, by 1890 America had about 150 different faiths. 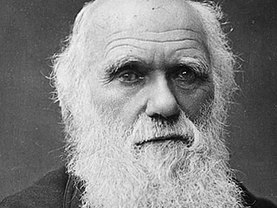 Darwin was a British scientist who discovered the theory of evolution and transformed the way people thought about the world. At this time, most people believed that the world was created by God. Darwin destroyed the normal belief on how the world was created's in his book On the Origin of Species in 1959. He suggested that people might just have evolved from apes. Darwin was  rejected  by scientists until the 1920 and attacked by the Church. Fundamentalists believed the bible as it is written and that god created the world. Liberal Christians mixed evolution with divine creation. They justified evolution by saying God created evolution. Modernists rejected religion and accepted Darwin's theory of evolution.