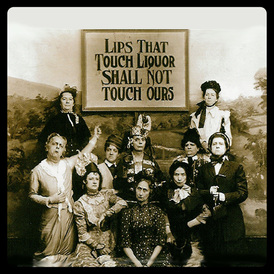 The Temperance movement to prohibit alcohol was wanted mostly by women. They wanted to get rid of  alcohol because it  kept the men drunk, took their family's wages, and increased the violence at home . In  "How The Other Half Lives" by Jacob Riis he talks about how a boy was asked by an officer "Where do you buy your bread?" and the boy  repiled "We don't buy no bread; we buy beer,". The Woman's Christian Temperance Union created in 1874  was led by Francis E. Willard and Carrie A. Nation who were very aggressive, they walked into a bar and chopped it up with a hatchet. The Anti-Saloon League was created in 1893 and they increased the push against alcohol by singing anti-liquor songs. These efforts did work on a local level, some states banned alcohol and in 1819 the 18th Amendment  was passed and it  banned alcohol in the U.S. Because of the 18th Amendment men got angry and violent and  eventually it was repealed by the 21st Amendment that allowed alcohol again.